On this day, 10 years ago, my wife and I loaded up my Chevy Malibu and headed East to CHOP, Children's Hospital of Philadelphia leaving 4 kids behind with my parents.  It was a snowy day much like it is today here in Columbus and a very dangerous trip with plenty of wrecks and jack-knifed tractor trailers along the way.

We traveled to CHOP for a 2nd opinion by a world-renown eye specialist after our daughter Catherine was diagnosed with retinoblastoma, cancer of the retina.  We prayed harder than ever before.  We begged the intercession of St. Lucy, on this her feast day, after all what better way to glorify God than to have an eye cancer healing on the Feast of the Patron Saint of eye troubles.

God said, "no", and this is my reflection from shortly after that time.... 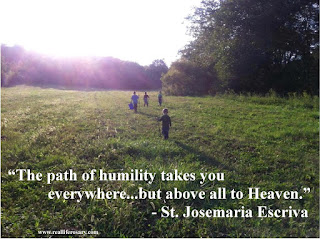 Most recently I prayed, as did many of you, that my daughter Catherine would be healed of the cancer in her right eye and that it would not need to be removed. We prayed hard everyday. We offered to God sacrifices and some of them heroic. We prayed novena after novena to Lucy, Peregrine and others. In the end, God said, "no".

For the first few months of Catherine's life I viewed God as a miracle dispensing machine. I thought that if I asked hard enough, said enough prayers, offered enough sacrifices...He'd cough up a good 'ol miracle. After all, I reasoned, with the state of faith today, couldn't He use the attention of a bona fide miracle to get more souls on His side? I argued, pleaded, threatened. In short, I threw a good, solid, spiritual temper tantrum. He said "no" and I ran off to my room and vowed to never talk to Him again.

In His goodness, He helped me realize this shortly before Catherine was diagnosed with retinoblastoma. My prayers this time were different. I prayed earnestly for a miracle but only if it was His will. I vowed to trust Him no matter the outcome.

In prayer one day, like a little child I asked Him, "why do you say "no" so often?" He had two answers - 1) You ask for snakes, 2) I say "yes" far more than I say "no". Snakes? The answer came to me in an instant. He was referring to the passage in Matthew when Jesus says, "...if he asks for a fish, will you give him a serpent?" God was giving me the opposite and true statement saying essentially, "you asked for a snake, I want to give you a fish."

I realized that God has other plans for me and for Catherine. A miracle cure of her eye was not part of that plan and that I need to trust that what He will do through her will be far greater. God only says "no" when we ask for snakes.

I thought long and hard about Him saying "yes" far more than He says "no" but just couldn't see it at the time but I accepted it. It wasn't until our family was returning from a long trip that I realized how often He does say "yes". As we pulled into the drive I was moved to give thanks for the safe trip we had and I asked everyone to say a prayer of thanksgiving with me. It was at that moment I heard Him whisper, "see, I said yes again." I thought of the prayers we had said 16 hours earlier asking for a safe passage and realized that yes indeed He does say "yes" far more than "no". The problem is that I am far less observant and thankful than I should be when He does say "yes".

As I write this I can think of hundreds of little prayers offered to God and the positive answers He gave. I am ashamed that I went on my merry way, like the other 9 lepers, not returning to thank Him each and every time. I pray for the grace to be more thankful. We all prayed for good results from Catherine's tests and that she wouldn't need Chemo, He said "yes".  In fact, the doctor called on Christmas Eve day to let us know that when she removed the eye, she had gotten all of the cancer and none had made it into her brain.  It was a big "yes".

God says "yes" far more often than He says "no" but I must retrain myself to see these little miracles and answers to prayer. He says "no" because He loves me and has a better plan for my life and the lives of those entrusted to me.

God, give me the grace to be more thankful for both your "yes" and your "no".  During this season of Advent help me to remember all of the times you've said "yes" to my prayers.  Help me to realize that your "no" is also a "yes" to what is best for me, your love.


* Contains affiliate links.  No, that doesn't mean that the kids should leave the room.  Rather, it means that if you click on a link, and if you purchase something, I may get some financial remuneration for that click and buy.  All that means is that my kids will finally get to eat, just kidding but I may get something, just so you know...