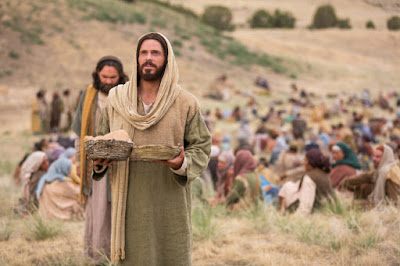 If I wasn't in the same boat as these sinners following Jesus I would probably be laughing right in their face. I often wonder how Jesus kept from rolling on the grass laughing at what some people do.

Today we hear the crowd ask Him, "What sign can you do, that we may see and believe in you? What can you do?..."

Is this not the same crowd who in verse 2 we are told - "followed him, because they saw the signs he was performing on the sick."?

Are these not the same people who in verse 14 "when they saw the sign he had done, they said, "This is truly the Prophet, the one who is to come into the world."?

Yet still they seek a sign. However, they are not seeking a sign so that they might believe, they are wanting to be fed. Jesus worked a "sign" with the loaves and the fishes and now they want Him to do it again. Jesus is using their bellies to get to their hearts!

I often imagine myself being in the crowd of people following Jesus. This section of the chapter, especially verse 25, always makes me laugh. Jesus knows they are following Him seeking more bread but they act like this meeting is simply coincidence. "Rabbi, when did you get here" in my mind is like saying, "whoa, Jesus, what a coincidence all 5000 of us running into you here on the other side of the sea. We were coming over here for...um...well, bread, actually..."

I certainly cannot look down on those people. I too have a short memory. I too often forget the many miracles God has worked in my life. When I want something from God I cry out, putting Him to the test - Do you love me? Show me a Sign! I forget about my conversion or think that it was my own doing or was going to happen naturally anyway. I forget about the perfectly arranged events that led me to meeting my wife.

My desires for signs, like those people in the Gospel, are often fleshly desires. I want to feel this way, again. Like them I want to experience that "high" of witnessing a miracle and I don't want that high to end. Yet, if I am observant, patient, and open, Jesus can use that base desire to lead me to higher things. He can turn my hunger for good bread into a hunger for the Bread From Heaven. He can turn my desire for earthly things into a desire for Heavenly things.

FROM THE SAINTS - "Stoics, ancient and modern, were proud of concealing their tears. He never concealed His tears; He showed them plainly on His open face at any daily sight, such as the far sight of His native city. Yet He concealed something. Solemn supermen and imperial diplomatists are proud of restraining their anger. He never restrained His anger. He flung furniture down the front steps of the Temple, and asked men how they expected to escape the damnation of Hell. Yet He restrained something. I say it with reverence; there was in that shattering personality a thread that must be called shyness. There was something that He hid from all men when He went up a mountain to pray. There was something that He covered constantly by abrupt silence or impetuous isolation. There was some one thing that was too great for God to show us when He walked upon our earth; and I have sometimes fancied that it was His mirth." - G. K. Chesterton - Orthodoxy