(originally posted in 2006 but nothing has changed much) 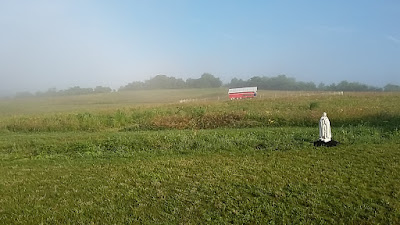 Our family recently moved out of a one-bedroom apartment and into our new home.  We had lived in the apartment for more than five years and with three boys under five-years-old it was starting to get a little cramped.

My parents gave us some property and we began to build the home of our dreams.  My father-in-law and I built the basement one block at a time.  My father installed the plumbing, heating and cooling while I installed the electric, primed, and painted.

We moved into our new home in August after about a year of serious construction.  When we unpacked most of our belongings we found that we had forgotten one thing, cable television.  We found ourselves staring at a black screen wondering where the world had gone and why we had been left behind.  When the television was turned on all we could watch was the all too familiar “snowstorm”. Rabbit ears didn’t help a bit and there was absolutely no chance of installing a towering eyesore outside our new home.  We had decided to cut back expenses so a satellite dish or cable was out of the question.

The boys were distracted by the change in living quarters from a shoe box to a freezer box so the lack of “entertainment” didn’t bother them much.  They were too busy running from room to room and hiding in every nook and cranny.  I resigned myself to the fact that I really didn’t need the “idiot box” anyhow and this was probably for my own good.  So, I sat down in the rocking chair and looked out the back window.Not As Bad As It SeemsAfter a few evenings of rocking and looking out the window, like an old man waiting for his youth to reappear over the horizon, I realized that we had something far better than television in our possession.   Our “back window”, a three section French door, is larger than any big screen television and only slightly smaller than most home projection screens.  It doesn’t cost much to operate except an occasional spray of Windex and some caulking.  Most importantly though is the variety of programming we have available.

My family has witnessed some of the most intense dramas known to man.  We have watched episodes of life and death played out before our eyes in three-dimensional full color format.  We have watched quietly as small groups of whitetail deer make their way across the hill toward new feeding ground for the winter.  One of the deer was injured by a hunter earlier in the season and we didn’t think he would make it.  Yet, in the spring we saw the same deer on the neighbor’s property and the boys rejoiced. 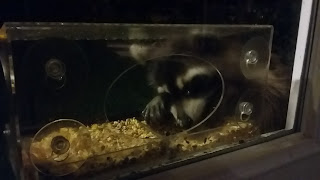 We have watched rabbits bounce through the yard and we have watched them be carried off by hawks and coyotes.Our family has also sat with rapt attention during some of the most amazing aerial feats that make shows like Top Gun and Jag look like cartoons.  We have seen intense battles over the seed in our feeder and we have seen graceful formations of geese glide overhead.  In the fall we spent most of one day, fogging up the window with our breath, watching with a controlled fear as thousands upon thousands of birds filled the sky appearing to move a giant shapeless mass toward their winter destination.  Far above the hill we have seen buzzards circle and glide wafting the air for their food and we have seen hawks seemingly drop from the sky at break-neck speeds only to soar skyward again after snatching their prey.

The world of sci-fi was not lost to us in our loss of a television.  With a screen as large as the wall, only two exterior lights on, and bowls full of popcorn we watched the most intense nighttime snowstorm you could imagine.  One minute we felt like we were screaming through space.  The next minute we thought our house was in the middle of one of those glass snow balls that you shake to get the snow swirling.Get Up and Get OutFor thousands of years man has made his way through time without a television for entertainment.  He has watched the natural world around him and not only been entertained but enlightened as well. The natural world outside the window is far more beautiful, intense and entertaining than anything that could be produced on the big or little screen.  We would highly recommend some quality programming tonight.  Simply turn off the television, pull up a chair, and gaze out at the world around you. 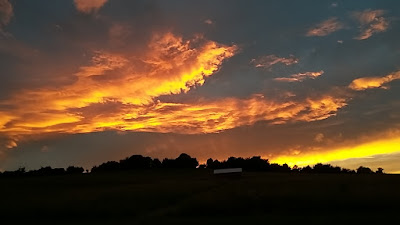 Better yet, walk out into that world.  Walk out into your backyard, neighborhood park, or zoo.  Visit a lake, a stream or even a metro-park.  Take your family where there is real life to gaze upon and wean yourselves from that fake box on the shelf that produces only a dismal reflection of real life.  Roll in the grass and the snow, watch the drama of life and death, or lie still in the grass for a very long time and try your hand at what my sons call “buzzard hunting”.