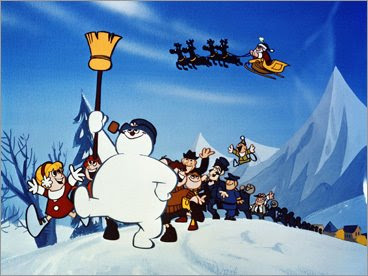 MUN - Columbus, OH
Preliminary hearings began today in the trial of Mr. Frosty T. Snowman who is facing charges on a number of counts. Mr. Snowman is being represented by Mr. Jack Frost in the Franklin County court proceedings. Numerous organizations and agencies have filed suit against Mr. Snowman for what they say are, "actions that endanger the health and safety of the citizens of Ohio."

Mr. Snowman, who has a winter home in the Central Ohio area, said he was shocked by the accusations. Lawyers representing the anti-smoking establishment charged that Mr. Snowman encouraged young people to smoke and polluted the air around the city with his corncob pipe. Mr. Frost appealed to the court stating, "Mr. Snowman never has and never will light his pipe. In fact he is afraid of fires and only continues to keep the pipe because it was a gift from the children."

The anti-smoking lawyers asked for time to research this claim and reminded Mr. Snowman that beginning Thursday December 7th, the state ban on smoking would take place. Mr. Frost questioned why that ballot initiative was proposed while both he and his client were out of the state.

After a short break, representatives from the Ohio Environmental Protection Agency questioned Mr. Snowman on his use of coal. "We understand that they are your eyes, Mr. Snowman, but we would like to know where the coal came from and if the land was re-claimed after stripping it for your personal use," one lawyer questioned. Mr. Snowman was silenced and warned by the judge when he went on the offensive stating, "if you put more time into finding alternative fuels for power maybe we wouldn't have this global warming problem that forces my lawyer and me to leave the state much earlier than in years past."

The Columbus organization for the protection of children questioned Mr. Snowman on his dealings with young people in the area. They demanded that the court conduct a background check on Mr. Snowman and learn if he has been through any child protection training. Mr. Frost assured the court that Mr. Snowman has nothing but love for the children, "Frosty is a wonderful role model for the children. He gives until it hurts. He is concerned about their physical well-being and exercises with them. He encourages them to be clean and even shows them how by playing games with a broom. He is a snowman of honor and has even been seen comforting crying children." "Besides," he added "he has sticks for arms. How are you going to fingerprint him for a background check?"

The presentation was interrupted by loud cries from the lawyers for the City Police who claimed that he had violated several traffic laws including jay-walking, running a stop sign, failure to yield, and intimidating an officer.

At this moment Mr. Jack Frost leaped to his feet objecting strongly and was charged with contempt of court for nipping at the judge's nose. Frosty appeared to vanish leaving a few of his belongings behind including the mysterious hat, in a puddle by his chair. The hearings were postponed until a later date. Some of the children in the courtroom were visibly shaken by the experience. Others were questioned as to what day Mr. Frosty T. Snowman might return.