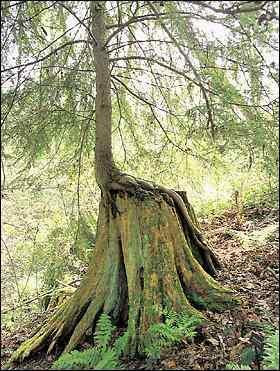 Years ago I dug up a Dogwood tree from one part of our property to transplant it close to the house. The tree did not last long. However, being busy with life and the transplanting season being long gone, I left it in the ground until I had a chance to replace it.

While mowing one day I noticed something interesting about the tree. About two inches above the ground a few branches had sprung forth. After about a month I noticed that there were close to a dozen small branches growing from this area close to the ground. The remainder of the tree was dead, brittle, and the bark was pealing away.

That same year I had went to a apple tree grafting program and grafted a couple trees. One in particular died the moment it went in the ground, or so it seemed. Months later it too sprouted branches that were stronger and longer than the original.

In today's first reading we hear the prophet Isaiah say these words, "On that day, A shoot shall sprout from the stump of Jesse, and from his roots a bud shall blossom." Jesse is the father of King David (1 Sam 16:11, Matthew 1:6).

By the time of Jesus' birth, it appears that the House of David has been cut off and is dead for all practical purposes. There hasn't been a true King to lead Israel since Solomon. When Solomon's son, King Rehoboam, ruled with a heavy hand, that hand destroyed Israel.

So why does Isaiah mention Jesse rather than David? Why would he mention this man that we hear little about? God is fulfilling a promise that comes to Samuel when He says, "I am sending you to Jesse of Bethlehem, for I have chosen my king from among his sons."(1 Sam 1:1) David was God's immediate choice but His ultimate choice would come from another son of Jesse. And this Son would fulfill the rest of the prophet Isaiah's words.

Turning to the disciples [us] in private he said,“Blessed are the eyes that see what you see. For I say to you, many prophets and kings desired to see what you see, but did not see it, and to hear what you hear, but did not hear it.” (Luke 10:23-24) The wonder and awe of the season begins to grow! Come Lord Jesus!

P.S. - You may have heard of a Jesse tree and this is basically where it comes from. The Jesse tree is an Advent practice where a family may hang different ornaments upon a tree with each ornament representing something from Salvation History from Adam and Eve, through Jesse, and on to Jesus. This is what we did last year and you may want to try it yourself - Jesse Tree craft-swap.  This year we are using the images from Holy Heroes (they are free) and the meditation/scripture readings from Shower of Roses.


Have you joined our 90 Day Adventure through the Bible?  Join us and see yourself in the story of Salvation!  All the details are here!

* Contains affiliate links.  No, that doesn't mean that the kids should leave the room.  Rather, it means that if you click on a link, and if you purchase something, I may get some financial remuneration for that click and buy.  All that means is that my kids will finally get to eat, just kidding but I may get something in return.