It seems as though snakes or serpents have gotten a bad rap throughout history, most especially in scripture.  Yet, maybe it is with good reason.  Out of all of God’s land animals it is probably the least like man.  It slithers on the ground without limbs.  It lays eggs and abandons the nest.  It depends on external sources for body heat.  They are very different than us and this may be the reason they have been so maligned. 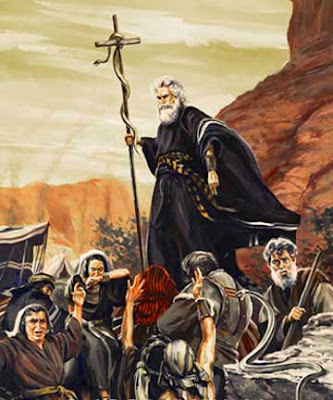 In Genesis the very face of evil is on a serpent.  We must note that the use of the word serpent in this instance really does not denote a simple snake.  The image in the original language would connote to the reader the image of a large, dangerous, dragon-like creature.  This would also more readily explain Adam’s reluctance to protect the garden and his wife.

In today’s first reading we once again see the serpent.  In fact, this creature is shown as not only the inflictor of pain but as a punishment for the sins of God’s people, “With their patience worn out by the journey, the people complained against God and Moses.”

“And just as Moses lifted up the serpent in the desert, so must the Son of Man be lifted up, so that everyone who believes in him may have eternal life.”  Here Jesus does something fascinating that should not be lost on us.  He shows us that first of all, he is the new Moses who will intercede for God’s people.  He is the new Moses who is leading God’s people out of slavery, out of the desert, and into the Promised Land.

Secondly, he is showing us that He will take upon himself the very image of that which is causing our death, sin.  Here, Our Lord and Savior, in speaking of the desert serpent story, most closely associates himself with the serpent, with the cause of our death.  How can this be?  The second reading of the Mass today gives the answer, “Christ Jesus, though he was in the form of God, did not regard equality with God something to be grasped.  Rather, he emptied himself taking the form of a slave and coming in human likeness; and found in appearance, he humbled himself, becoming obedient to death, even death on a cross.”

God in his humility and mercy took upon himself the venom of the ancient serpent.  He allowed himself to be bitten for our offences.  He lifted Himself up on the Cross so as to affect a cure for his people.  In one swift move at the Crucifixion, Jesus becomes Moses interceding for us.  He becomes sin for us in order to put sin to death – “For our sake he made him to be sin who knew no sin, so that in him we might become the righteousness of God.”2 Cor 5:21