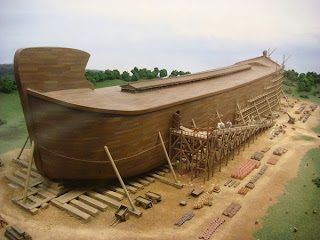 In recent years there has been a deluge of Apocalyptic literature produced in the Christian world. The Left Behind series comes to mind. In these books we are shown what happens to those who are "left behind" after the "rapture" (a recent theory that reared its head in the 19th century) which proposes that Jesus will return, take the good and leave the bad to be ruled by the anti-Christ for a period of time before the end of the world.

In the case of Lot, his wife disobeyed the instructions of the Lord and was taken (turned into a pillar of salt) while Lot was "left behind." (See Genesis 19)

When Korah and his family rebel against Moses the ground opens up, swallows them and then closes again.  Moses and those obedient to the Lord are "left behind."  (See Numbers 16)

In Scripture, it seems that it is the good guys that are "left behind" while the evil are wiped from the earth.

As we begin our approach toward Advent our daily Scripture readings and Sunday Mass readings focus on the coming of Christ. In the early part of Advent we are reminded to be ever ready, we know not the day or hour that the Master will return.

Being ready for His return is what is important, not only during any certain season, but everyday. How much different our world would be if we all lived as though the Lord may return any second, before our next breath! This is not to say that we would be standing idly around, bible and rosary in hand. Rather, it means that, as St. Paul says, "whether we live or die, we are the Lord's." You and I must be ready, our souls must be in a state of grace, for He is coming back and He is both Our Savior and Our Judge.

A good practice for today or for Advent would be for us to constantly stop throughout the day, maybe at the striking of each hour, and ask ourselves if we would be ready if the Lord arrived right now. Would we be comfortable having Him look upon us in our present state? Would He find me doing little acts of love or speaking unkind words? Would he find me busy with my duties or entertaining worthless or sinful thoughts? I must be ready. He is coming back just as He said He would!

Two good books that explain the Church's teachings regarding the End Times and being "left behind" are Will Catholics Be Left Behind: A Critique of the Rapture and Today's Prophecy Preachers (Modern Apologetics Library)

and The Rapture Trap: A Catholic Response to the end times fever.


Have you joined our 90 Day Adventure through the Bible?  It begins Thursday November 28th.  Join us and see yourself in the story of Salvation!  All the details are here!