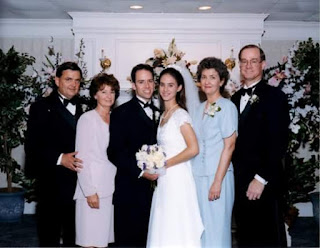 My wife and I kept up a long-distance relationship for a very long time before actually meeting in person.  She is from Louisiana and I'm from Ohio.  We chatted on the phone and online in chat rooms, where we met, back when the hardest part of our conversations was getting kicked offline and having to wait on the dial-up to reconnect.


We met in person for the first time at Franciscan University of Steubenville in Ohio for a Defending the Faith Conference.  Her parents traveled with her as did mine.  I think both families wanted to make sure we weren't meeting some creepy 47 year-old bald, overweight guy.  Side Note: I've become that 47 year-old, overweight bald guy so I think I win or something!  Once we met in person we began frequently flying back and forth to see each other.  Those were the days when you could pass through airport security with a pocket knife and meet one another at the gate.

On my first my first visit to Louisiana I distinctly remember sitting on the sofa with Nicole after her family had gone to bed.  I think we were watching TV or talking when she turned to me and asked, "would you be okay with us not kissing?  I know that that can lead to other stuff and it's easier to not start at all, maybe save our first kiss for our wedding day if that's where this is leading?"

I'm not sure if that's what she said but that is the gist of it.  I was a little shocked but at the same time I wasn't.  Over the previous 8 months or so we had gotten to know each other pretty well through our regular online conversations about nearly everything.  I was smitten by this woman and would do whatever she asked so I agreed.  We decided to not kiss until the priest told us we may at the altar.  We kept to that and our very first kiss was on the altar at our wedding!

Another thing Nicole asked me to do while we were dating and engaged was to learn NFP (Natural Family Planning).  She had ordered a home study kit from the Couple to Couple League.  Once she was finished she passed on the 35 lb tome for me to read through.  Seriously, this book was huge!

I began reading through it and was blown away.  I had never learned about the female body and reproductive system in this way.  I knew how babies were made but I had no idea of cycles, hormones, temperatures, mucus, or any of that.  I remember reading this textbook in awe of how God had created woman and most especially the woman I was to marry.  I was 100% on board with the NFP program.  After learning the beauty of the female system, neither of us had any desire to douse her body with harmful chemicals.

After we married we began charting her fertility signs.  My job was to give her the thermometer each morning at the same time and then chart the temperature.  She handled the rest.  She could have handled the temperature too but it was a wonderful way for me to be involved with her cycle.

We later became a teaching couple for the Couple to Couple League and taught many other couples in Central Ohio about the beauty of natural family planning.

We married in August and conceived in September.  I still have fond memories of charting her temperature each day, watching the temperatures elevate and stay elevated indicating that we had, with God's help, conceived a new life.  9 months later Anthony Blaise, now 18, was born.  Another boy, Christopher Andrew was born in September the following year.  Then in 2004 William Joseph.  Samuel two years later.  Catherine two years after that.  Two years after that Daniel (see a pattern)?  Then five years later Isabella was born and then just short of two years later, Becket.

What I love about NFP

To me NFP is another way to say "I love you" to Nicole.  It's a way for me to respect her as God has made her.  It's a way for us to grow closer, to have serious discussions about our family and the future.  Often, when those physical desires were at their peak, we would sit down and look at her NFP chart, pray about whether or not this was a good time for another child, and make the decision together.  Out of 8 children, only one was a surprise but at the same time it wasn't.  Since NFP isn't merely about mechanics it helped us to stay open to God's plan and when we learned that we were unexpectedly expecting, we were filled with joy at God's gift.  I love NFP because it respects her, opens up our communication, and can be used to acheive or postpone pregnancy.  The two year spans were purposeful.  The five year span too was purposeful.  NFP has been a great gift and blessing to our marriage.

What I hate about NFP

NFP isn't always easy.  The easy way is to give in to our desires.  The easy way is to somehow disrupt or thwart the act of conception.  My base desires want things my way.  I want to be with my wife when I want, whenever I want.  I often become angry and resentful of NFP at these times.  Yet I know this speaks more about my weak nature than it does about natural family planning.  Those periods of abstinence can either be a blessing or a drudgery depending on my spiritual state or mood.  NFP works and works well but it isn't easy. But what in life is there that is worth doing that comes easy?

Sex as a Prayer 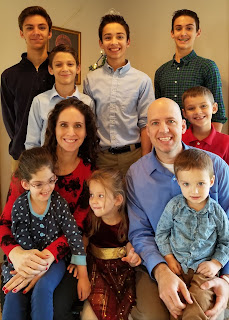 This morning Nicole and I sat in bed listening to our 8 children begin the day.  The oldest was going off to the Zoo with his girlfriend.  The other older ones were eating breakfast and getting ready for a college visit.  The younger ones were slowly waking up and preparing for a day of play mid-summer.  We sat in bed and prayed morning prayer from the Liturgy of the Hours together thanking God for our family.  We know that NFP has been a blessing that has made all of this possible.  NFP makes sex what it is supposed to be, a prayer.  It is a prayer of joy for one another.  It is a prayer of thanksgiving for the gift of children.  It is a prayer of praise to the Creator who made such a wonder bond.  Sex within the context of NFP is a prayer that repeats the words on the altar shortly before that first kiss, "I do give myself to you freely, totally, faithfully, and fruitfully."  Amen!