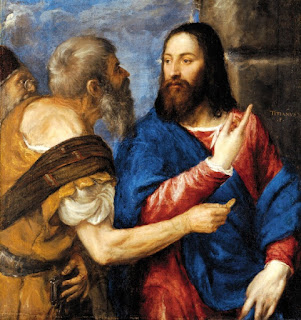 On my journey back to the Catholic Church after years of selfish living I was invited by a Catholic
gentleman to join the Knights of Columbus. This man was part of my life when I was a member of the Boy Scouts. Now, after years of wandering, he was ready to accept me, forgive me, and bring me back into the Church and into that fellowship of men. We worked on many projects together and I held him in high regard.

When news came that he had an inoperable brain tumor the parish was shocked. He, and we, knew that things would never be the same. The suffering that he would endure was offensive to us, but embraced by him. He set an example even to the last minute.

I imagine that the disciples experienced the same pain when Jesus announced the facts of His imminent Passion. Up to this point in Matthew's Gospel it had been something of a joy ride for the disciples. They had been with "the Man". They had witnessed miracles, healings, and events that they often couldn't believe with their own eyes. They had heard words of wisdom that no mere man could create. Up to this point they had been riding high and very much enjoying Jesus' company and perhaps the "fame" that went with being one of His followers.

It is no wonder then that Peter and presumably the others became upset. Peter even went so far as to "rebuke him." Yet Jesus doesn't shy away from what is to come. Rather, He challenges Peter to think as God thinks not as man thinks. He challenges them to not focus simply on the earthly events that they have witnessed, but to go deeper and see the mission of the Christ, to bring salvation to the world.

We find the same message in the first reading.  Rather than do as the Lord commands, Moses thinks as man thinks.  God wanted to show forth His power by having Moses merely speak to the rock.  Moses takes things into his own hands, literally, and strikes the rock, not once like before, but twice...a human effort to make things happen.  By doing this, he casts a shadow on God's power.  The people rejoice at the flow of water but how much more would their faith have been strengthened if Moses would have been obedient and trusted in God's ways?

So what about you?  Are you thinking as God thinks or as man thinks?  Are you open to God's plan for your life, even if it involves suffering, or do you want to control things?  It's not easy to follow Christ, just ask St. Peter!  Let us pray today that you and I hear Jesus say to each one of us, "blessed are you...for flesh and blood has not revealed this to you, but my heavenly Father" and not "Get behind me, Satan!"

FROM THE SAINTS - "Nobody is happy on earth until he decides not to be. This is the way the path goes: suffering - in Christian terms - the Cross; God's Will, Love; happiness here and afterwards, eternally." - Saint Josemaria Escriva, The Furrow # 52

Get 3 of our most popular eBooks (PDF) + 4 Simple Steps Daily Worksheet for only $2.99.  Click here for a description of each book.