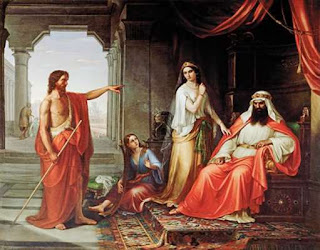 The late Father John Hardon often said that sexual immorality often ends in homicide. I would add that it can also end in spiritual homicide or suicide.

When humans seek to follow their own base desires in the area of sexuality, death is often the result. By misusing the very faculty designed by the Lord to bring forth life, death enters in.  Death is often the result because of an attempt to hide evidence or in some sick, twisted way, remove the guilt. A rapist may kill his victim so that she may not identify him. A couple in an adulterous relationship may attempt to "remove" their lawful spouses because he or she poses a hindrance to the illicit affair. A young man may force a young woman to seek an abortion in order to destroy the "evidence" of their sexual relations.

In today's Gospel we see that Father Hardon's saying is true. John the Baptist was murdered because of the sexual immorality of Herod and his brother's wife, Herodias. Herodias knew that what they were doing was wrong and she no longer wished to be reminded of her sin. She wished to continue, for whatever reason, to live in this sin and John the Baptist was a painful reminder day in and day out. So trapped by this sin was she that she forfeited the possibility of gaining even half of the kingdom. Instead, driven by hate and guilt, she chose to hold the head of the Baptist on a platter.

Herod was not so much wicked as stupid and careless. His delight in watching his niece dance, which we are told "pleased Herod and his guests", most likely a very provocative, lustful dance in order to gain the favor of nearly half Herod's kingdom, also contributed to John's death. His sexual immorality in his life with Herodias and his rash oath spoken at the height of lust over his niece silenced the "voice crying out in the wilderness."

Lord Jesus, help me to be a witness to the sanctity of marriage. Give me the strength to stand up for Your design. Pour out Your graces upon those who are living in sexual immorality and bring them closer to Yourself. Bless married couples and give them the grace they need to be witnesses, like John the Baptist, to a world that so desperately needs them. Saint John the Baptist, martyr for marriage, pray for us!

FROM THE SAINTS
"There is no doubt that blessed John suffered imprisonment and chains as a witness to our Redeemer, whose forerunner he was, and gave his life for him. His persecutor had demanded not that he should deny Christ, but only that he should keep silent about the truth. Nevertheless, he died for Christ. Does Christ not say: I am the truth? Therefore, because John shed his blood for the truth, he surely died for Christ." - From a homily by Saint Bede the Venerable, priest

(This is an affiliate link.  By clicking on this link I may earn money by your purchase.  I do not recommend anything I haven't read or used personally and believe is of value to you the reader.  Thank you)