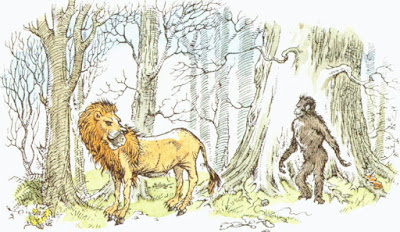 When our children were much younger I would read the Chronicles of Narnia to the boys each night before bed. Although they were too young to appreciate the fullness of the stories, they enjoyed them tremendously. They loved the battles, kings, princes, talking beasts, and of course Aslan (the Christ figure of the stories).  It's hard to chose a favorite out of those 7 books but if I were made to chose it would be the last book - The Last Battle.  Like the title suggests, it's the last epic battle between good and evil.  It's a final battle, last judgement, and the opening of the gates of Heaven all in one little book.  In fact, Lewis' description of the children and good animals entering into "Aslan's country" is by far my favorite description of Heaven, or at least what I hope it's like!

In The Last Battle, an ape named Shift (the Satan figure in this story) tricks the inhabitants of Narnia into believing that he is Aslan's spokesman. He does this by dressing up a donkey named Puzzle in an old lion skin they found floating in the river. When the true king of Narnia learns of this he works to make things right.  He works tirelessly to try to convince the inhabitants that this is a trick.  During his struggle he sets a group of dwarfs free from the clutches of the enemies who were taking the dwarfs to be slaves. Yet, a strange thing happens. The dwarfs refuse to serve the King and Narnia. In fact, they refuse to believe in the false Aslan (Puzzle) as well as the real Aslan himself. The dwarfs refuse to believe in anything but the dwarfs.  How many of us have felt that way after being hurt by someone we trusted?  The land of Narnia becomes divided against itself as a result of the evil tricks of the ape.  Soon follows the last great battle of Narnia.

Satan is clever. His name is also Diablo - the divider. God is the God of unity. Satan seeks disunity. He does this only by twisting that which is good and holy into something evil. Like Shift, Satan often dresses up others to appear as Christ in order to lead souls astray.  How many cults, false prophets, leaders, and even apparitions have led good souls astray?  Like Shift, he seeks to set a house or kingdom against itself. Satan wants us to follow the Ass dressed as the Lion, or at least follow the lead of the dwarfs and believe only in ourselves.  He wants us to to follow false leaders, become atheists, or at the very least, humanists.  He wants division, destruction, and annihilation of all that is good.

In today's Gospel, Jesus tells us "Every Kingdom divided against itself will be laid waste." He is showing His contemporaries that their accusation that He casts out devils by the name of the devil is illogical. In other words, if Satan and his minions didn't have one common goal, their kingdom would be destroyed or at least falling apart. In my mind, this is what makes Satan so dangerous and powerful.  There is no division in his ranks.  They are "hellbent" on one goal, eternal destruction of all that holds the image of God.  In my mind this is also why Christians are having such difficulty bringing peace to the world.  We aren't "heavenbent" on one goal!!  We are divided on everything from liturgy to doctrine and music to scripture.  The more we argue, the more we are divided, the easier it is for "Shift" to point to so many other false Christs.  We look less like an army and more like a bunch of scattering, scrapping chickens!

Regardless, like the good Narnians in The Last Battle, you and I are called to follow the King. We are called to fight the enemy who mocks God. We are called to side with Aslan (Jesus) even though we cannot see Him and in fact have never "seen" Him but only heard tale of Him or only heard His voice. We are to press on in His name until it is time for us to enter Aslan's Country (Heaven).  If we cling to the Church, the pope, the Bible, the sacraments, and the Catechism we will continue to hear Jesus' voice and will not be lead astray by an Ass pretending to be a Lion.

"There are two equal and opposite errors into which our race can fall about the devils. One is to disbelieve in their existence. The other is to believe, and to feel an excessive and unhealthy interest in them. They themselves are equally pleased by both errors and hail a materialist or a magician with the same delight." - C.S. Lewis - The Screwtape Letters

Have you entered the Rosary-A-Day Giveaway?
Registration is open now!

How to get better at prayer.
* Contains affiliate links.  No, that doesn't mean that the kids should leave the room.  Rather, it means that if you click on a link, and if you purchase something, I may get some financial remuneration for that click and buy.  All that means is that my kids will finally get to eat, just kidding but I may get something, just so you know...