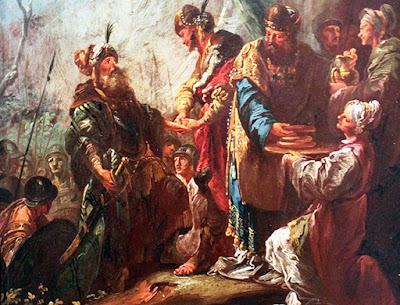 In today's chapters we begin to learn about Abram.  This descendant of Adam is called by God from somewhere near modern day Iraq or Assyria to travel to the promised land, the land of Canaan, modern day Israel.  He is there for a brief time before a famine forces him to move on to Egypt.  Before entering Egypt, he and his wife, Sarai, agree to act as brother and sister out of fear for Abram's life.  Pharaoh takes Sarai into his company because of her beauty.  When Pharaoh learns of what Abram has done he returns Sarai, gives them provisions, and sends them away.

In chapter 13 Abram, Sarai, and Lot (Abram's nephew) return to the land of Canaan.  Abram and Lot part ways.  We see that Lot chooses to travel east "as far as Sodom".  This should sound an alarm bell in our reading.  Both Adam and Cain moved east, away from God.  Here we are told only that "the men of Sodom were wicked, great sinners against the Lord."  We will learn more about this city soon enough and it's wickedness.

Chapter 14 is filled with seemingly endless names of places, kings, and battles.  In the end, Abram's nephew, Lot, is captured and Abram must go and help rescue him and his people.  It is here that we are introduced to Melchizedek, King of Salem.  He brings out bread and wine and blesses Abram and Abram gives Melchizedek a tithe of everything.  The Church sees Melchizedek as a prefigurement of Christ who also offered bread and wine.  It is also interesting to note that Salem means peace, Shalom in Hebrew.  We could say Yuru-shalom or Jerusalem, the City of Peace.  So Melchizedek is the King of Peace, King of Salem and is to prefigure Christ who enters Jerusalem as the Prince of Peace!

I found Abram's response to the King of Sodom curious.  Does Abram know what type of men these are and so his answer is short and abrupt?  Unlike other kings, the King of Sodom does not ask for spoils, he asks for people.  We may learn why in the chapters to come.

Chapter 15 beings with a conversation between Abram and the Lord.  Abram laments his childlessness while the Lord promises countless offspring.  The Lord invites Abram to leave his tent, look to the sky and try to count the stars.  Careful reading of these paragraphs would reveal that Abram would have seen only one star, the sun..because it was day!  Were the stars still out there?  Yes!  Abram couldn't see them, let alone count them.  Even so, "he believed the Lord' and he reckoned it to him as righteousness."

Here we also read of this strange sacrificing of animals, flaming torches, and birds of prey.  To us this may seem strange but to those who lived it it was of utmost importance.  God was making a covenant with Abram.  He promised Abram not only uncountable offspring but the land as well where they will dwell.  God is swearing by Himself that He will be with Abram and his descendants.  Why the animals?  In covenant language it was saying may the same destruction happen to whomever broke the covenant.  This should help us understand Christ's sacrifice even more.  We broke the covenant, we deserved the destruction, He took it upon Himself!!

Sarai takes their childlessness into her own hands in Chapter 16.  She suggests that her Egyptian maid give Abram a son for her.  Abram was a little to eager to go along with this plan and so her maid, Hagar, conceives Ishmael.  God, true to His promise of countless offspring, keeps this promise with Ishmael since he too is the son of Abram.  However, this is not God's plan and so we will have to wait to see where Jesus' bloodline continues since it is not with Ishmael.  Many believe that the Muslims trace their lineage back to Abram through Ishmael.  According to Muslim tradition, Ishmael and Hagar are buried next to the Kaaba in Mecca.

QUESTIONS TO PONDER
Have you ever acted like someone you are not out of fear as Abram did?  How did it work out?
Is God asking you to trust Him right now even though you can't see what He has planned?
What promises have you made to the Lord that may need some work or repair?
Have you ever taken matters into your own hands like Sarai did with Hagar?  Was God patient with you?

Have you joined our 90 Day Adventure through the Bible?  Join us and see yourself in the story of Salvation!  All the details are here!

* Contains affiliate links.  No, that doesn't mean that the kids should leave the room.  Rather, it means that if you click on a link, and if you purchase something, I may get some financial remuneration for that click and buy.  All that means is that my kids will finally get to eat, just kidding but I may get something in return.