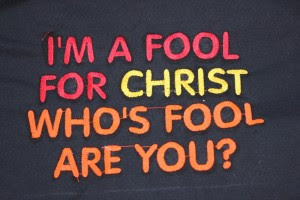 I often wonder what life would be like for St. Francis if he were to live in our day. What would it be like if a friend of ours renounced the successful family business his father owned and chose a life of poverty? What would our reaction be if a friend we went to high school with showed up at our door dressed in burlap asking for the scraps from our dinner or extra building materials we may have in the basement? Most likely you and I would smile, offer them a cup of coffee, and then call his or her family members or doctor. We would think that our friend had lost their mind!

We see similar behavior in young men and women who are in love. They can be in love with another person or an idea but the effect is usually the same. They do and say crazy things. They are consumed with their thoughts. They have this strange look as though they are looking through the world and everything in it to something beyond.

In today's Gospel we find that Jesus' friends think he is crazy. The passage is short for today, only two verses - "Jesus came with his disciples into the house. Again the crowd gathered, making it impossible for them even to eat. When his relatives heard of this they set out to seize him, for they said, “He is out of his mind." (Mark 3:20-21 NAB) The RSV-CE says it this way, "he is beside himself" indicating a sort of split personality or that He is crazy. The Douay-Rheims says simply, "He is become mad."

What made Jesus' friends and relatives react in such a way? The answer is not clear from the text but it is obvious that He has done something to cause them great concern. It appears that Jesus is neglecting Himself even to the point of not eating. It seems that those who love Him are concerned that He is giving too much of Himself (oh if they only knew how much He would give!). Between the lines you can almost hear the murmuring, "He's lost his mind, he doesn't eat, he barely sleeps. He looks terrible. He can't go on like this. He needs to send these people away and stop this nonsense. What is wrong with him? He must be sick in the head. We must intervene, we must drag him away for his own good. Maybe after some rest he'll come to his senses" and on and on.

"For the foolishness of God is wiser than human wisdom" (1 Corinthians 1:25), "We are fools on Christ's account" (1 Corinthians 4:10). Scripture, Tradition, and the lives of the Saints make clear that "the servant is not greater than the master" and so we too, if we are living for Christ, will be thought mad by the world. When was the last time someone thought you were crazy as a direct result of you living your faith? When was the last time a friend or relative tried to set you aside and tell you they were concerned about how generous you are? When is the last time you felt a "fool on Christ's account?" It's time to get crazy! We need saintly madness more today than ever before!